Apparently for the last month or so I've horribly neglected my blog (not that I usually don't) but since this past month hasn't been void of activity (it's just that facebook > laziness) I guess it's only fair to post my work here too, for some people might not like using social sites.

I know my regular 4 or 5 fans already know what I'm about to show you, but I thought that you - my spontaneous, random visitor - would like a slice of poetry too. Bear poetry ...

Without further ado, in a random order the Picasa collage tool arranged them: 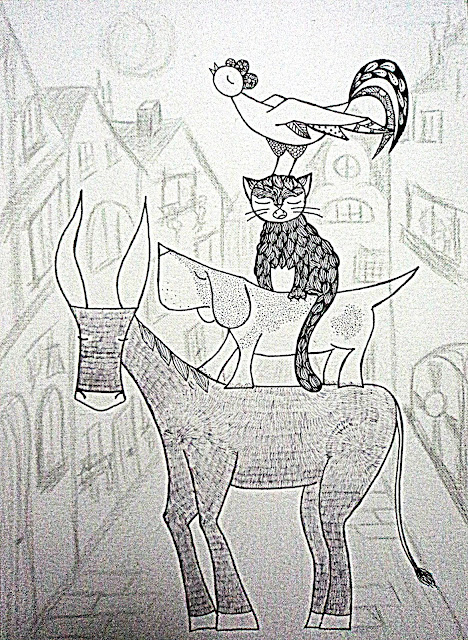 Die Bremer Stadtmusikanten - this is actually the most recent WIDT (07.12). I don't usually do inspired by drawings but I really needed a reason to draw the awesome rooster. Beside that, it was a wonderful exercise in hatching and I think I like where this is going. It's liner and coloured pencils. I might go for a mix of pencils and liner on the background, or just liner, or maybe even leave it this way because ...I like it! 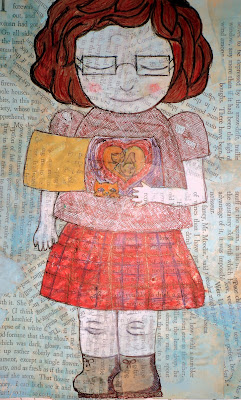 Next stop is a self portrait. Gasp! Oh, noes. Oh, yeahs. I drew this the same day as Poopy Owl, which is 10.10. It's mixed media: ball point pen, coloured pencils, some acrylics and I think some watercolour too. All on top of beautifully clipped, glued and painted-on book pages.

And this is Pebble. Or Pietricica. She's an anthropomorphized cat. She's part of a diptych I sold at a charity auction, with a dude you'll meet later. Fun fact: I used potato stamps for the leaves and the bow :) You can't see but the knot of the bow is sewed on with real thread! Other than that she's all liners. Her Today is 29.11. 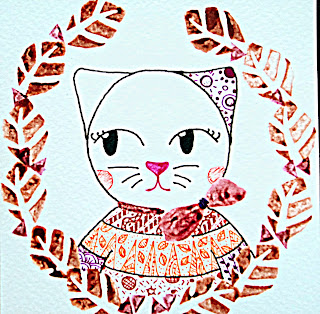 Here we have Pebble again. Full size though. She's all liners, a button and some collaged letters. 26.11 is her birthday! 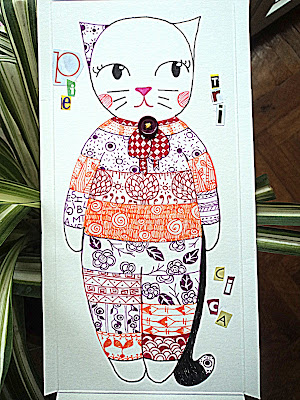 And this is the awesome dude I was telling you about. He's Pete. Or Petrică. Pete is a (surprise, surprise) anthropomorphized cat as well. Here he dreams of Summer - those bubbles are his dreams, of forests and wind caressed leaves. Pete here was also sold at the charity auction. His birthday is 05.12. He's made up of mostly liners with some acrylics, a sewed on button and some wrapping paper thrown in. You know, for flavour. 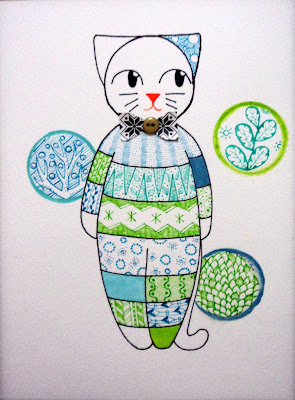 Here's the other half of the diptych. Yes, it's Pete! (Hint: you'll see plenty of him around if all goes well :) His wreath is also potato stamped, as is his bow - whose knot is, again, sewed on. Liners & 29.11 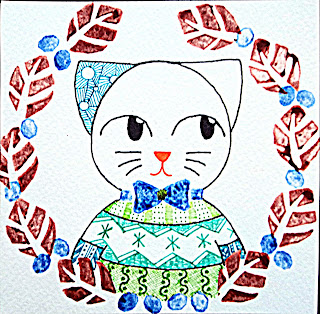 What we have here is potato stamp mania! Or "The Guest" as I titled it, but potato stamp mania sounds so much better. It's a little mountain village in the midst  of Winter. It's such a hospitable village that it is about to receive the visit of a honourable forest inhabitant.

I really liked drawing this, it felt like unraveling a story: who lives in this little orange house? why isn't there any smoke coming out from the green house, who planted this beautiful tree so close to his house and most of all, who will the bear visit? Liners, watercolours and acrylics, all used on 06.12. 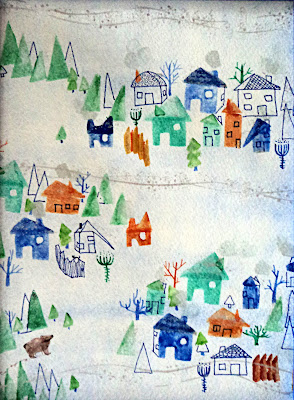 And last, but not the least, it's Pete! What did I just tell you? There's plenty of Pete to go around. He's the first ever drawn Pete, the father of all Petes :)  He's liners, sewed on button and collaged letters. He's funny. I quite fancy him, he's quite charmed, I'm sure. 25.11. 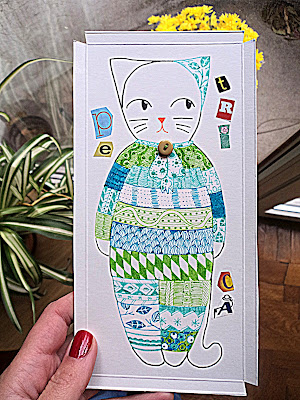 I'd apologise for the crappy photos but it really isn't my fault. The weather sucks - photography conditions wise. As soon as the weather changes I might take better shots of the drawings I still own.
>> Poet Bear