I somehow get the feeling I've lost sight of what What I Drew Today means (to me).

The first and most important evidence being that there aren't many 'todays' but only 'some days' and that was not the point.

So today I drew. Unfortunately (for my ego) I didn't draw something I'd normally share with you.

Buuut, I'll do it none the less because that is what I drew today and lessons can be learned and hopefully not forgotten. 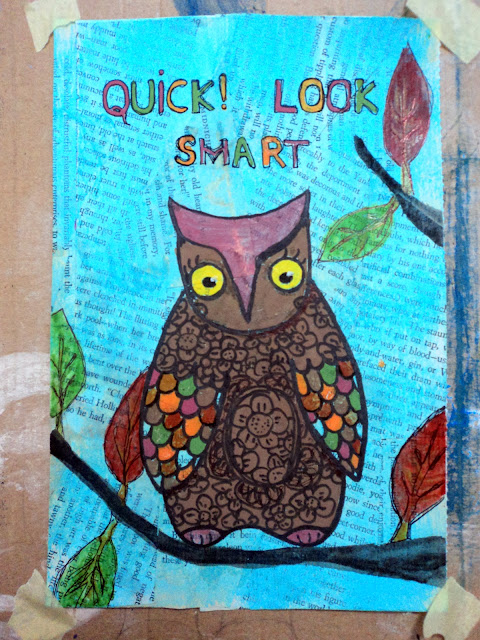 I really liked the idea of having a "constructed" background as opposed to a "created" one and I really, really wanted to draw something nice and perfect.

I wanted to call it The Literate Owl and she would have said something like "Read more books!" or "Reading is fun!" but then I slapped on that horrible blend of sage green, orange and corral red and it became Poopy Owl.

Poopy Owl is in a bit of a shock, she didn't know there's such a huge burden as educating the masses on her tiny shoulders. She didn't ask to be the poster girl for smart, quirky, hip phrases.

And so, putting together her little story I think I started to kind of like Poopy Owl. I think I'd like to have her over for a coffee and some apple cake and talk about how hard it is to fill in some big shoes.
>> Poet Bear